Dr. Knope is a board-certified internist and sports medicine expert. He completed his premedical studies at Columbia University and graduated with honors in internal medicine from Cornell University Medical College in 1988. He completed his residency training at UCLA, where he was awarded the first Sherman Melinkoff Teacher of the Year Award. He has served as Chief of Medicine, Chairman of the Department of Medicine, and Director of the ICU in the Carondelet system in Tucson, Arizona. He is a pioneer in the field of concierge medicine, opening one of the first concierge practices in America in December 2000. He authored the first book on concierge medicine entitled, Concierge Medicine; A New System to Get the Best Healthcare (Praeger, 2008).

Knope has received local and national media attention for his work as an uncompromising patient advocate and opponent of the HMO industry. He has been covered in the Arizona Daily Star, Money magazine and The Wall Street Journal. In his fight against a local HMO, Nobel Peace Prize Laureate and inventor of the cardiac defibrillator, Dr. Bernard Lown, praised Knope as “courageous” and “deeply principled.”

Knope has served as the official internist for the Colorado Rockies baseball team during their spring training in Tucson and has been a member of the editorial board of The American College of Sports Medicine’s Health & Fitness Journal. He is a highly regarded national speaker on the subjects of obesity, fitness, and exercise.

Before entering the field of medicine, Knope was a professional French horn player who performed extensively in New York and Europe, including performances as a featured soloist at Lincoln Center and on New York radio station WNYC. He earned his Bachelor’s of Music from the Mannes College of Music in New York.

Knope practices the lifestyle that he preaches. He is a four-time Ironman triathlete. The Ironman is composed of a 2.4-mile open-water swim, a 112-mile bike ride and 26.2-mile marathon. In January 2000, Knope published his first book, The Body/Mind Connection, a groundbreaking book that examines the power of physical strength and the positive impact a strong body can have on our overall health and psychological well being. Knope is a practicing martial artist and holds a 3rd-degree black belt in Kenpo Karate. He has competed in international martial arts tournaments in Europe and studied for a decade with Master Gilbert Velez, a 9th-degree black belt and senior instructor of the International Kenpo Karate Association.

Concierge medicine, retainer medicine, direct medicine, and boutique medicine are all terms used to describe a new form of medical service in which patients contract directly with their doctor for medical services. By removing the third-party payer, your physician acts as your advocate, with no interference or conflict of interest from outside parties.

Internist Steven D. Knope, M.D., a pioneer in creating patient-centered care for optimal health and wellness, is the first physician to offer this comprehensive, personal approach in Tucson. Click here to read more about Dr. Knope’s medical background as well as his Concierge Medicine Manifesto.

Dr. Knope is the author of two groundbreaking books and numerous op/ed pieces on medicine and our healthcare system. His work has been featured in The New York Times and The Wallstreet Journal and has appeared as a panelist on Fox News and PBS. Click here for links to articles and to read excerpts from his book, Concierge Medicine: A New System to Get the Best Healthcare.

Dr. Knope is available for speaking engagements as well as interviews.

Check back here for upcoming events. 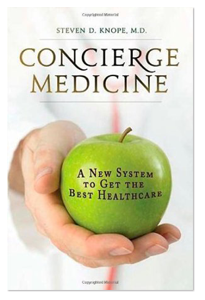 Weekend or after-hours appointments for emergencies